Adophe Appia was a visionary Swiss theatre theorist in the late 19th and early 20th centuries.  His ideas of stage space defined by light rather than by painted sets had a profound influence on Edward Gordon Craig, David Belasco and other early 20th century practitioners.  But never have Appia’s theories been so triumphantly vindicated as in Robert Lepage’s production of the Ring at the Metropolitan Opera.

Appia wrote at the very moment that gas stage lighting was giving way to electrical lamps.  He was also an adherent of the “modern” view, espoused by Richard Wagner and George Duke of Saxe-Meiningen, that a stage production should display a comprehensive artistic unity linking actor to text, costume, action and setting.  He rejected the two-dimensional painted scene in favor of a three-dimensional setting in which a three-dimensional actor properly belongs.  This required plasticity of space, and Appia advocated light as the source of that expressive and changing quality on the stage.  As mood changes, so should space and light change.  Light for Appia was thus the counterpart to music for Wagner: An infinitely pliant interpretation of the dramatic action being portrayed on the stage by the actor.

Appia’s seminal theories are set forth in Die Musik und die Inscenierung (1899).  However like so many theatre professionals of his time he was deeply intrigued by Richard Wagner’s challenges – both those of theory and the extraordinarily difficult problems posed by his stage works.  Appia tackled those works in particular in La Mise en scène du drame wagnérien (1895).

Appia attended Bayreuth in 1886 and was appalled by the production of Tristan that he saw there.  “A living thing is being presented without life,” he wrote, and proposed an approach that was minimal, spare, and controlled by light rather than by objects like sets and props.  Appia eventually sent Cosima Wagner a complete set of stage proposals for the Ring, which featured ideas that were as beautiful as they were revelatory.

Cosima’s response: “Appia appears not to know that in ’76 the Ring was performed here and consequently there is nothing more to be discovered with regard to staging and directing.”  Cosima understood lighting as a way to improve illumination of the performers and the painted scenery.  Appia understood the stage as an open space with changes of scene and mood created by lighting.

(For an excellent treatment of Appia and Wagner, see Patrick Carnegy, Wagner and the Art of the Theatre (Yale 2006), Chapter Six).

When we attend the Ring at the Metropolitan, what do we see?  A unit set that remains onstage the entire time.  Yet it is physically plastic, with its 24 three-sided “planks” yielding an infinite number of surfaces on which actors can walk or hide or bellow or cower.  Acoustically it is a gift to the actors – the vocal lines in the opening of Walküre Act III no longer need to be doubled, as they were in the prior Met production, because the set acts as a back-wall or acoustic shell that bounces sound staight out to the audience.

But the main utility of this vast stage construction is for light to play upon it, just as Appia conceived.  And in the century since Appia, the nature of the light that can be projected has become extraordinarily exciting.  The space can be rendered kaliedoscopic, as in the Magic Fire Music.  It can be expressionistically spare, as in Wotan’s Decent into Niebelungen.  It can be severely literal, even microscopic, as the worms and grubs slithering along the forest floor in Act I of Siegfried.  It can respond to the movement of the actors in ways Appia could never dream, as when bubbles are emitted from the mouths of singing Rheinmaidens or leaves are kicked about as the characters walk during Brünnhilde’s Awakening.

It is not often that a modern production so thoroughly validates hundred-year-old theory.  Robert Lepage’s theatrical excitement, cutting-edge though it appears, has its intellectual foundations in European stagecraft of the late 19th century, and is deeply rooted in the Wagnerian ideal of the unified work of art, relating the stage to the actor to the movement to the narrative to the music to the stage again.

I hope Appia is looking down (or up, as the case may be) and is pleased. 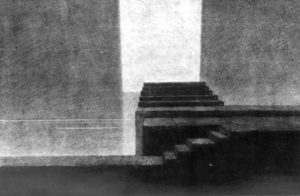