This past summer I was experiencing the regret of the “more mature” Wagnerian, when rummaging through the bookstores in Bayreuth.  These places were my treasure troves 30 years ago.  Now, I realized with the vague remorse of increasing age that I either had these books or knew of them and decided not to acquire them.  See Ecclesiastes 1:9.  Just as I was leaving the store opposite the Golden Anchor, however, I saw in the corner a few copies of a 2007 volume whose cover featured a beautiful photo of the inside of the Festspielhaus: 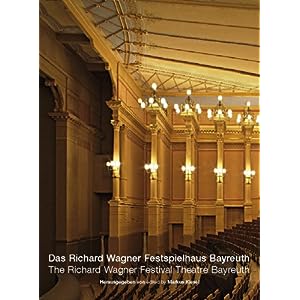 This is Das Richard Wagner Festspielhaus Bayreuth/The Richard Wagner Festival Theatre Bayreuth, edited by Markus Kiesel.  And it turned out that this beautiful book — written in German and English — is what I had always lacked: the definitive study of the remarkable theatre designed pursuant to Wagner’s demands, and a radical departure from theatres of that era — or since.

The authors are serious students of architecture, design, and stagecraft.  The peculiar effect of the half-timbered, brick, stucco-ed facade of the building is studied in the context of contemporary and prior architectural styles, to demonstrate that Wagner’s own skepticism about past schools of building are reflected in the sui generis look of this one.  Many lost details come to light — such as the functionality of the ledge molding on the first proscenium, which (as it turns out) was carried along by a sewn line in the original curtain, about two meters from the stage floor, inviting the spectators’ eye to be adjusted to the height of a person.

The revolutionary nature of dimming the auditorium lights, the choice of the ornamental palmette on the peaked front roof and use of rolled “volutes” on the roof corners, the selection of spots on the grid for winches to accommodate the absence of side-stages — nothing escapes notice.  The discussion of the sunken pit begins with the story of 7-year old Wagner’s visiting Geyer’s theatre and hiding in a “secret theatre loge,” and advances to the modifications starting in 1875, when Wagner instructed Carl Brandt to sacrifice two rows of auditorium seats in order to accommodate more violins, to Wolfgang Wagner, who removed the wooden floor in front of the clarinets, to enhance their sound, and had half the wall under the “shell” extended 20 cm (7.8 inches) to allow more arm movement for the second violins.

This is a wonderbook for those of us whose enthusiasm for Wagner’s iconoclasm goes beyond his work as a musician and extends to his work as a theatre artist.  “I am not a musician,” wrote Wagner in 1882 — he was a teller of dramatic tales.  He placed the orchestra in service to the stage and the singer in service to the storyteller.  This book satisfies the need of anyone who wants to learn about this remarkable theatre, and wants to show others why so many of us will always be going back to Bayreuth, and this remarkable, remarkable building.