The American Ring is more uncomfortably American than we might wish.

One of the many rewards of attending Francesca Zambello’s production of the “American Ring” for the second time recently in Washington, DC, is the chance to admire, and chew on, the insights that she offers.  It is one thing to set the action of the Ring in the American mythological past – for example, to see Alberich in the shallows of the pristine Colorado River, panning for gold nuggets.  It is quite another to consider how close our society is to the themes that are central or Wagner’s concerns.

On example is offered by the video sequences that intermittently accompany orchestral preludes or scene changes.  Many of them show railroad tracks, or travel – a fundamental and unique aspect of the American imagination.  Indeed, the second scene of Walküre is set below a freeway, on which travelers zip by, oblivious to the squalor beneath them. 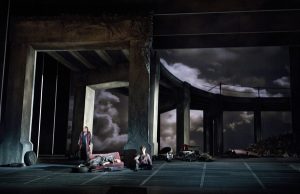 Setting Valhalla in a modern skyscraper is no not-new as to be disappointing.  But in this “American Ring,” it becomes an expression of energy.

Mining is there to create electricity.  And utility lines are … power. 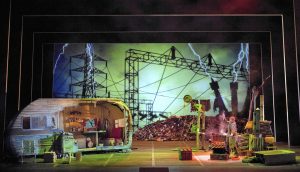 Thus, the images that are offered cohere the production and remind us that power – what Americans do every day when we walk into a room or turn on an oven – is what both America and the Ring are all about.  We Americans seek, create, expand, and take for granted the easy access to power all the time.  And we have done so it the sacrifice of the natural world.  Where there once were salmon there now are dams, and where there once were hills there now are mines.  World Ash, anyone?

In such a world littered with discarded debris and detritus, why shouldn’t a giant on the run convert himself into a fearsome trash compactor? 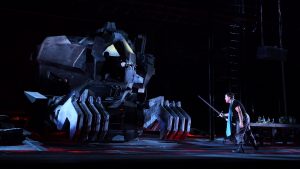 Thus we are asked by this production:  How remote and mythological are the Niebelungs and the gods to our present society, that is made possible only by the creation of power/energy, at the cost of the beauty and authority of the natural world?

[Prior postings on this production, reflecting its first run at the San Francisco Opera, are available here and here.]
Production Review Ring Cycle