A promising opening for a new Ring Cycle

If the entire Ring Cycle now being mounted at the Chicago Lyric Opera has even a fraction of the intellect and panache that the first installment, Das Rheingold, displays, then the Windy City is in for a treat.  Between the Cubs and David Pountney, Chicago is having a hell of a good Fall.

Musically, the production gave me the first chance to hear Eric Owens as Wotan.  I had been unaware of this formidable artist until 2010, when Rheingold started the LePage Ring at the Metropolitan Opera, and this amazing guy in fearsome dreads sent shivers down the spine as an Alberich who took no prisoners.  His Wotan is an exercise in command, both dramatically and musically.  I am eager to see Act II of Walküre, to see how indecision, vulnerability and despair change this massively authoritative god.  I was also taken by Laura Wilde, whose Freia grew to become quite fond indeed of Fasolt’s enormous hand, as well as Okka von der Damerau’s haunting Erda. 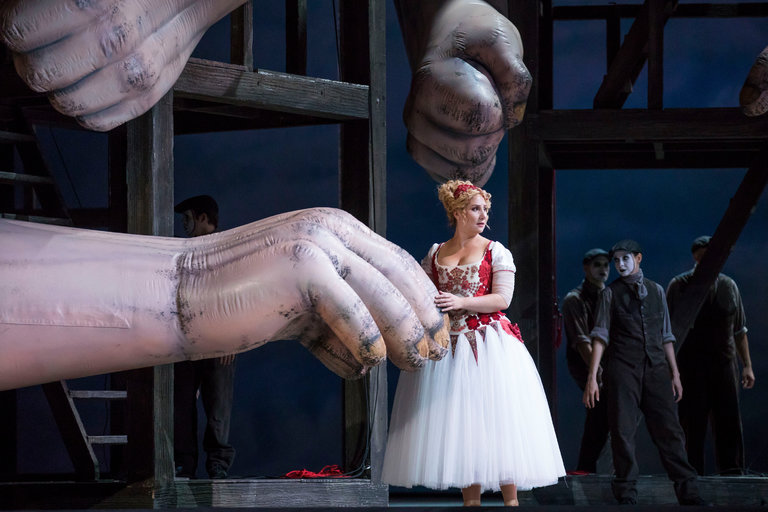 The whole company was very good indeed under Sir Andrew Davis’ perceptive baton.  The singers were augmented by supernumeraries and puppeteers whose contributions under David Pountney’s brilliant stage direction were impeccably carried out.

The performance took place on a wooden stage that featured a skeleton fly space, two skeleton side towers, and a rudimentary but functional hemp system.  The towers included lighting equipment and the overall feel was Brechtian in the very best sense.  There was no effort to transport us under the waters, up in the clouds or below the earth; rather, we were made aware that we were watching a performance taking place on a stage, a re-enactment of an epic tale of fundamental import to our culture.  The performance was put on, and constantly stage-managed, by three weird sisters – perhaps the Norns of fate, perhaps the fates from the world encountered by Macbeth – but in any event evocative, all-powerful, and constantly presentational.

When things moved, the stagehands moved them.  When scenes changed, or rainbows appeared, or scenic transformations took place, they were accomplished by stagehands in our full view.  The Giants were pieces of puppet – a head, a hand – latched onto rolling towers and both magnificent and blatantly theatrical.  The murder of Fasolt was genuinely frightening as giant detached feet stomped on puppets and stagehands alike.

Self-reference is a tool that only live theatre can fully exploit.  Mozart can quote from his own work in Don Giovanni, and films can construct “homages” to other films, but only live theatre can say to the audience, “here we are, all of us convened in this room on this day, looking the same direction at the same thing, and we are here for a purpose that we all acknowledge.”  I was deeply moved by the most recent production of Die Frau Ohne Schatten at the Met when at the triumphant coda, a huge wall mirror descended, the house lights warmed up, and we saw our own reflections onstage as Barak entreated us to live our lives in commitment to life itself.

Such a powerful self-referential theatrical gesture closed David Pountney’s Rheingold, as the Rainbow Bridge led to a model of the very theatre space on which the play we had been watching had been performed, and a succession of wings and drops framed that image with perspective replicas of the show curtain of the Chicago Lyric Opera itself – blazing in Deco, with pinks, oranges and reds.

As the orchestra blasted its cadences, the thing that was happening was that we had just seen Rheingold: We were here together watching this show on North Wacker Drive on a Sunday afternoon, it seemed to say, and we did so because it matters to us to hear this story told again, and for us to pay attention to it.

Powerful stuff.  As I say, I can’t wait for the next installment, and to gather with my community once again to hear the story told.