Barry Kosky’s new production of Die Meistersinger at Bayreuth is a polemic, suggesting that, in creating the role of Sixtus Beckmesser, Wagner intended to warn his audiences to reject the harmful influence of Jews on the integrity of German art.  Kosky asks further whether, in feeding this pernicious strain of German anti-Semitism, Wagner, along with the Nazis, should be held accountable for the German mass-murders in the mid-20th century.

While needlessly busy and distracting in places, the production is fairly clear in framing this inquiry.  It opens with Wagner in the library of Wahnfried, along with Cosima, Liszt, the children, Hermann Levi, and the servants bustling about with the energy of a madhouse.  The vorspiel gives way to the opening chorale, an occasion for kneeling devotions from the family and humiliation for Levi.  The action of the play itself then arises, with Wagner playing Sachs, Liszt playing Pogner, Cosima playing Eva, a younger Wagner playing Walther, a servant playing Magdalene, and the hapless Levi playing Beckmesser.

Eventually the setting of Wahnfried gives way to the hearing room of the post-war Nurnberg trials.  No legal proceedings take place, and the action of the play takes place as best it may among the furnishings of the 1948 courtroom, iconic to many of us.  At the end of the work, Wagner himself – setting aside the role of Sachs — defiantly argues that his work is part of the great tradition of German art, the integrity and nobility of which is durable and self-evident.  Near the end of Act III, Sachs sings, “I am accused and must stand trial, so let me select my witness.”  As if to testify on his own behalf, Wagner himself conducts an orchestra and chorus for the final strains of Act III, from the witness box. The art stands as its own best defense. 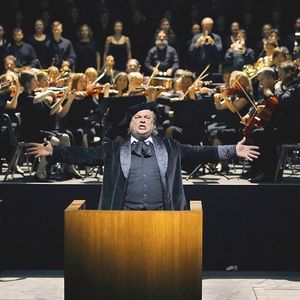 Within the frame of Wagner’s justifying his own work against accusations of complicity in racial extermination is Kosky’s portrayal of the anti-Semitic treatment of Beckmesser by the other characters and the citizens of Nurnberg.  The slights, the gibes, the faces made behind the Clerk’s back culminate in the finale of Act II, where the town subjects him to a beating reminiscent of Kristallnacht.  A 20-foot high balloon is inflated of a deeply offensive caricature of the Jew as alien, derived from the worst archives of Nazi bigotry and racism.  (Beckmesser, wearing a grotesque mask, dances — a reference to the Grimm fairy tale of the “Jew in the Thornbush,” which Theodor Adorno and others have cited as subliminally referenced in Meistersinger.)

(As an aside, I would like to have attended the production meeting where Kosky said, “Here’s where I want a 20-foot high inflatable Jew with an enormous nose and sloppy lips” and the production crew said “Absolutely, we’ll get right on it.”  I have frequently suggested that the triumphs of the 1951 neo-Bayreuth stagings were made possible only because the Wagner brothers had no money to build expensive sets, so they invented the bare stage productions that we regard as classic. What if the production crew in 2017 had said about the balloon, “No, I don’t think so, what’s Plan B?”) 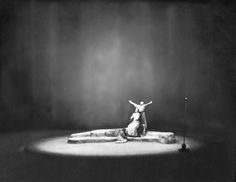 I found this approach unsuccessful on two grounds.  First, the anti-Semitic reading of this work, while not preposterous, simply too strained to merit serious consideration, much less adoption.  References to a thorn hedge in Walther’s Act I song can’t counterbalance far stronger, more obvious, more intended themes that overpower the work – the dominant one being the legitimacy of art in the creation of civil society.  “Beckmesser as the Jewish stereotype” is simply a canard. “Wagner as responsible for the Holocaust” is an egregious example of presentism – the practice of assessing past motives from present-day perspective.  As Thomas Grey has noted, none of the reviews of the original production of Meistersinger recognized that Beckmesser was a Jewish caricature, and none of the reviews of Wagner’s contemporaneously re-issued anti-Semitic rant “Judaism in Music” cited Meistersinger as an example of Wagner’s folding his racism into his art.  Indeed, some decades later, when cabaret parodies arose of Meistersinger and Jews, it was usually Walther who was discovered to be the Jew, not Beckmesser.

Moreover, as Hans Vaget points out, Nazi appropriation of Meistersinger some 70 years after it was written exploited its nationalism, not its supposed anti-Semitism.  Productions in the 1930s featured audiences rising at the “Wacht Auf” chorale and praising the Führer – none used the score as a vessel for Jew baiting.  What Vaget calls the “metapolitics” of Meistersinger focus on the notions of “an archetypal national community; of charismatic leadership; and of marginalization of the lone ‘reject.’”  These are notions deeply embedded in German culture and not unique to Wagner.  But as Vaget put it, “at its core, the Nazi cult of Wagner was a cult of genius,” not of Jew-hating.  And the idea that Wagner would devote six years of his life to creating a platform for anti-Semitism rather than for his own distinct artistic goals is simply ludicrous. Putting Wagner in the 20th century witness box may feel good to Kosky, but it simply isn’t in the work.

The other basis for objection is the refusal to allow this massive work to breathe.  Sachs’ “Wahn” monologue is prompted by a human proclivity for momentary civil disorder that Sachs himself describes.  This peculiar trait, which Sachs likens to a “goblin” or a “glowworm that could not find its mate,” is not the same as Kristallnacht, and if it were, it is Sachs’ mission to condemn it and “guide the madness to perform a nobler work.”  To stage the end of Act II as a Jew-beating is to narrow the scope of the work.  Indeed, I suggest, many decisions in this production reduced, rather than enlarged, our chances to gain insight into the topics of age, love, resignation, civil violence, erotic infatuation, social mobility and – especially – the role of art in the ordering of civil society that the work contains.

That said, it is a brave production.  It identifies our apprehensions and holds them to the light.  It comes from a theatre artist who is wrestling with what theatre is about at its core – what do we as a society feel about this pressing issue right now, and what are the consequences of our asking hard and uncomfortable questions, rather than simply settling into the familiar and unthreatening world of stockings and codpieces.  Bayreuth is the perfect place for it, affording a five-year workshop.  I hope Kosky retains his fire, disposes of some of the useless Three Stooges humor, and investigates how the work as a whole – not just parts of it, and not just the bits that he threw into it – pose serious questions to modern audiences.