Lyric Opera of Chicago is building a theatrically exciting, musically impressive Ring Cycle.  The addition of Siegfried in November 3, 2018, confirms the persistence of creative vision and the assuredness with which the project has been planned and executed, and makes one eager of the full Cycles in April 2020.  Without any sense of either comparing or competing, I don’t think there has been, or will be, a better Ring in years.

Director David Pountney and Conductor Sir Andrew Davis are responsible for a Cycle of solid musicianship of an international caliber, and a uniquely entertaining and gripping theatrical narrative.  With Siegfried, Eric Owens completes a majestic construct of the epochal spiritual destruction that is Wotan.  His achievement has been far beyond a well-sung performance, and is driven by the fundamental moral error that dominates both the narrative and the character.  Christine Goerke offered a strongly voiced Brünnhilde that was enthusiastically received.  Burkhard Fritz is a tenor whom I had seen only once before, in 2012, in the amazing Bayreuth Parsifal directed by Stefan Herheim. Here, as then, Fritz has the astonishing ability to lend his entire gifts to the production as a whole, reserving nothing of his own.  More explicitly than other Siegfrieds, we watch the development of a toddler in a (literal) playpen, to a “tween” with a sword, to a brash soldier, to a confused virgin, to an ardent and self-confident lover – all in the course of a single day.  Wagner called for this, of course, but when do you ever see it, the performer fully invested and the concept fully realized? 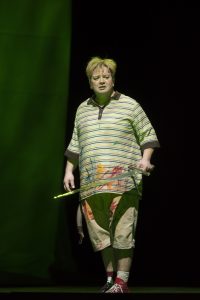 Siegfried continues Pountney’s production conceit that this tale is being told – yet again – by a troupe of not-quite-realistic players, summoned by spirits, or witches, or goblins; and that we ourselves have willingly assembled – yet again – in this theatre on this night to attend it.  So the itinerant stage equipment is assembled again, the props are laid out, the thunder sheet is hung stage left, and the great story is told anew.  This approach permits great gestures of theatricality, as well as a kind of participatory engagement by the audience.  Changes are made by a gang of beret-wearing white-faced actors, who attach a fabulous bird to a 20-foot stick and swing it around.  They slam the thunder sheet, change the set pieces, provide props as needed, and even bring on an anvil that arrives (just in time) from Amazon, complete with instructions on making swords. 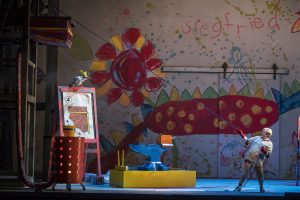 In this world of unapologetic theatrical excess, in comes Alberich pushing a cart that holds, among other things, the arm wrenched from his body, in a formaldehyde cylinder.  The stump where his arm was, is taken over by a grotesque toad that he hosts in some mutation of nature resulting from his tricked and interrupted transformation in Rheingold. 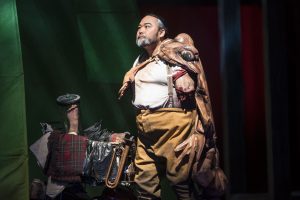 Throughout, Mime wears a be-stained white gown he stole from Sieglinde – a disgusting gesture as potent as any I’ve seen. 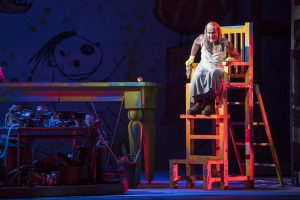 Siegfried and Mime live in a room with over-sized furniture in Act I, but by Act III both Brünnhilde and Siegfried retire, troubled, to corner rooms with tiny children’s chairs.  The white-faced actors pick up an inflatable tail and a claw, and manipulate a gigantic mask, to enact a battle where realistic representation is not the aim, so much as exciting theatricality. 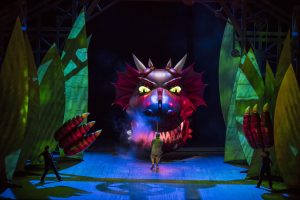 This Ring production takes place not in the woods or in the Rhein or in the clouds, but on the stage of the Lyric Opera on North Wacker Drive, and we are willing witnesses to it.  Released from any ambition to connive, transport or convince the audience, the artists tell the story right here and right now, even incorporating the art deco curtain of the Lyric as an element of the scene in Rheingold.  It is a uniquely exciting production that all should make a point to see. 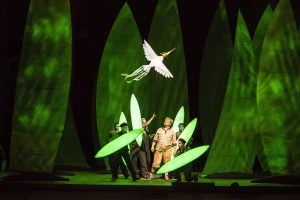