Those of us who remember attending performances of Birgit Nilsson sometimes wonder whether we are living in a delusion – falling into our grandfathers’ habitual complaints that, when we were young, the singers were so much better, the cheese more tasty, winters crisper, and walking to school was uphill both ways.

Could Nilsson really have been that stupendous?

Sony has released a mammoth box of CDs, Birgit Nilsson: The Great Live Recordings.  And it turns out that, yes, she really was.  And she was that great, not only in the studio for John Culshaw, but in the auditorium, live, with us sitting there to witness it.

As the title says, these are all live recordings from performances at Bayreuth, Munich, the Met, Stockholm, Orange, Vienna and Rome.  The earliest is Bartok’s Bluebeard’s Castle in 1953 and the latest is Die Frau Ohne Schatten in Munich in 1976. 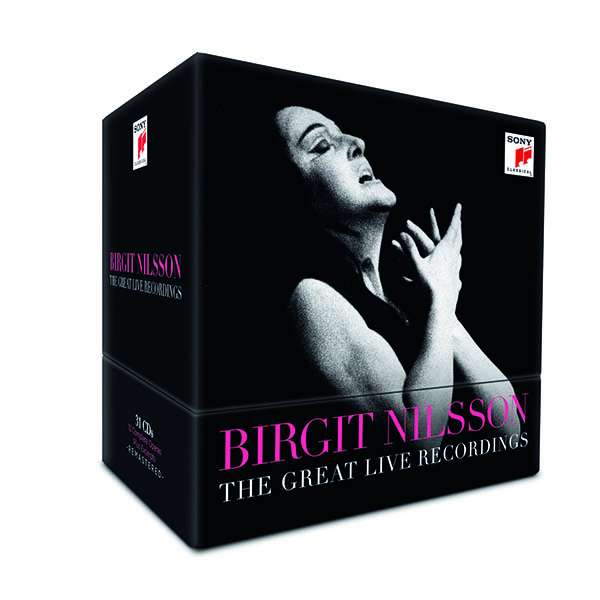 So what is it about this voice that is so distinctive and successful?  First is the timbre – chesty and deep, unwavering and always reliably planted.  Then is the vibrato, so well-regulated and so tasteful.  Next is the care she takes when preparing and performing the role.  Every note is sung with intention and each is a choice.  There are no elisions, nothing in the score that is suggested along the way, skipped over, or a mere passage to get to the “real” phrase coming up.  She has studied each word in the text and she performs each note in the score.

Then there’s the huge column of air that adds something entirely welcome to our ear.  It doesn’t just support this well-modulated sound; it supports us in some way, assures us that the long phrases will be ridden rather than survived, as great surfers harness and ride the energy of a wave — that great arcs of sound will be pouring forth without any sense of concern or limitation.  Listen starting at 5:00:

Finally, and most distinctive to me, is the sense of release and exhilaration above the staff.  Other singers get ready for the stratospheric note or phrase and have a go, often to brilliant effect.  But one often hears at the same time that it’s an exceptional effort, a place in the voice that is approaching the limit of the singer’s range.  Listening to Nilsson one realizes that she is released, not constrained, in these passages.  She feels, if anything, more comfortable rather than more challenged in high, forte passages.  She comes even more alive in a unique manner, which is a phenomenon all the more welcome when these passages occur in dramatic moments of extreme expression, such as Brunnhilde’s first realization, in Siegfried Act III, of the erotic impulse.  Listen again, starting at 9:38:

Some of the early recordings did not especially impress.  The Bartok seemed to have no point of view and the 1954 Lohengrin performance came off much better for Astrid Varney’s (amazing) Ortrud than for Nilsson’s Elsa.  But the 1957 Bayreuth Tristan is just magnificent from all concerned – Sawallisch conducting, Windgassen as a movingly intelligent Tristan, Hotter as Kurwenal.  Those who associate Nilsson with loudness and a sense of remove are encouraged to check out her portrayal of Isolde’s mournful, lost grief in Act III immediately after Tristan’s death: so personal, so intimate, so convincing in its sorrow.  And, this being a live performance, it finally satisfied my doubts that the octave jump at the end of the Liebestod, on the Solti Decca recording, is not the product of Culshaw’s clever splicing of the tape – she actually did that!

Capable as she is of intimacy, her 1961 Turandot at the Met with Corelli as Calef and Anna Moffo as Liu, Stokowski at the podium, is some strange exotic admixture of art, athletics and all-out war, with no prisoners taken.  Her second act simply nails your ears to the wall.  I have never heard a soprano simply bang it off the way she did.  Bravo Corelli for holding his own (and, yes, I’ve heard the tales).

The 1965 Met Salome and the 1967 Vienna Elektra are entirely scandalous and quite wonderful. But it is the 1969 Met Walküre that makes the collection.  This is a Saturday matinee radio broadcast (March 1) with Karajan in the pit, Vickers as Siegmund, Crespin as Sieglinde, Tavela as Hunding, Veasey as Fricka and the recently deceased Theo Adam as Wotan.  One can imagine the audience settling in for a very fine performance.  What comes to pass, however is nothing short of electric.  The control by Karajan is crisp while also deeply romantic.  Vickers and Crespin set the place on fire.  And Nilsson is just incomparable.  I very much welcomed the snippet of the audience response that was captured at the act endings, too – this was the Met when I first came to it at age 19: ferocious, loud, sudden and impulsive.  At the end of Act II, people simply opened their mouths as wide as they could and SCREAMED!

Indeed, I went back to my filing cabinet, and there it was: my program from the first Wagner performance I ever attended, the first time I entered the Met auditorium, the ticket stub for standing room that I had snagged the prior Sunday.  It was the Walküre performance eleven days before, on Wednesday February 19, 1969.  Riddersbusch was Hunding; the rest of the cast was the same.  Someone gave me their seat in the orchestra section for Act III and I thought at the time that such kindness is something that, if ever I were able to repay it once I grew up, I would be sure to emulate.  And I always have.

I will report again on the remaining performances in this glorious set.  For now, though, perhaps we must grudgingly consider the possibility that, when we old folks say the singers were better when we were young…. maybe they actually were.