Broad misunderstanding persists concerning Richard Wagner’s contributions to the theatre generally, and to theatrical production in particular.  Seen as he is primarily as a composer, Wagner’s theatrical insights have prompted only tangentially, and relatively recently, the scholarship it deserves.

Popular appreciation of Wagner’s contributions to theatre is even less acknowledged.  How many people who watch the rise of a “Wagner curtain” know that it was, in fact, devised by Wagner?  How many who sit in a theatre with dimmable house lights, or with side seats that face the stage, or who attend a summer festival, know that Wagner was the innovator of these practices?

It is therefore very welcome that Gundula Kreuzer has offered Curtain, Gong, Steam: Wagnerian Technologies of Nineteenth-Century Opera (Univ. California Press 2018).  As the title suggests, Kreuzer isolates three 19th century stage practices, each of which predated Wagner, but each of which Wagner elucidated upon, perfected, or substantially advanced.

The first topic, “Curtain,” is perhaps the most recognizable to theatre-goers.  Kreuzer’s argument is straightforward:  she reviews the psychological and narrative effect of the curtain in Western traditions of staged narrative, and then notes Wagner’s close concern about the timing, pace and effect of curtains, as embedded in the scores themselves.  Starting with Lohengrin, he notes not only the exact beat of the exact bar that the curtain is to rise or fall, but also its speed and intended effect.  For example, Act III of Gōtterdämmerung calls for the curtain to “open slowly.”  Sometimes the pace of the curtain is dictated by the place in the score — the curtain at the finale of Die fliegende hollander is perforce tumultuous as it begins to fall three measures before the end.  Plummeting curtains also mark deference to moral decency, as at the end of Act I in both Die Walküre and Tristan.

Kreuzer notes that Meyerbeer also marks curtain raising and lowering in his scores, but with nothing like to determination, intention and consequence that Wagner informed his stage productions. The proof is in Wagner’s creation of a curtain that neither rises vertically, as in contemporary European theatres, nor parts horizontally along a traveler.  “Instead, the Wagner curtain parted centrally and then moved simultaneously both sideways and upwards.” 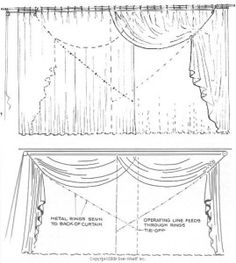 This is, of course, how curtains rise today at Covent Garden, the Met and elsewhere.

Of particular interest is a sketch reproduced in the book made by Walter Huneke, Bayreuth technical director 1966-90, showing that the master winch operating the curtain was conical.  This meant that a smaller amount of rope was engaged per turn early in the process than later in the process — and that, therefore, the curtain rose (or fell) more swiftly as the process proceeded (assuming a steady number of revolutions).

Just as Wagner was not the first to be concerned with curtain movement, he was not the first to use steam as a scenic effect and as a “scene curtain” for set changes, as in the descent of Wotan and Loge into Niebelheim.  But his use was so integral to his narrative that it became synonymous with Wagnerian theatre-making.  The post-Bayreuth touring production produced by Neumann included a traveling steam generator, and steam was not only associated with Wagner at that time… 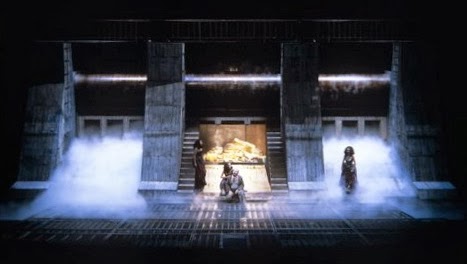 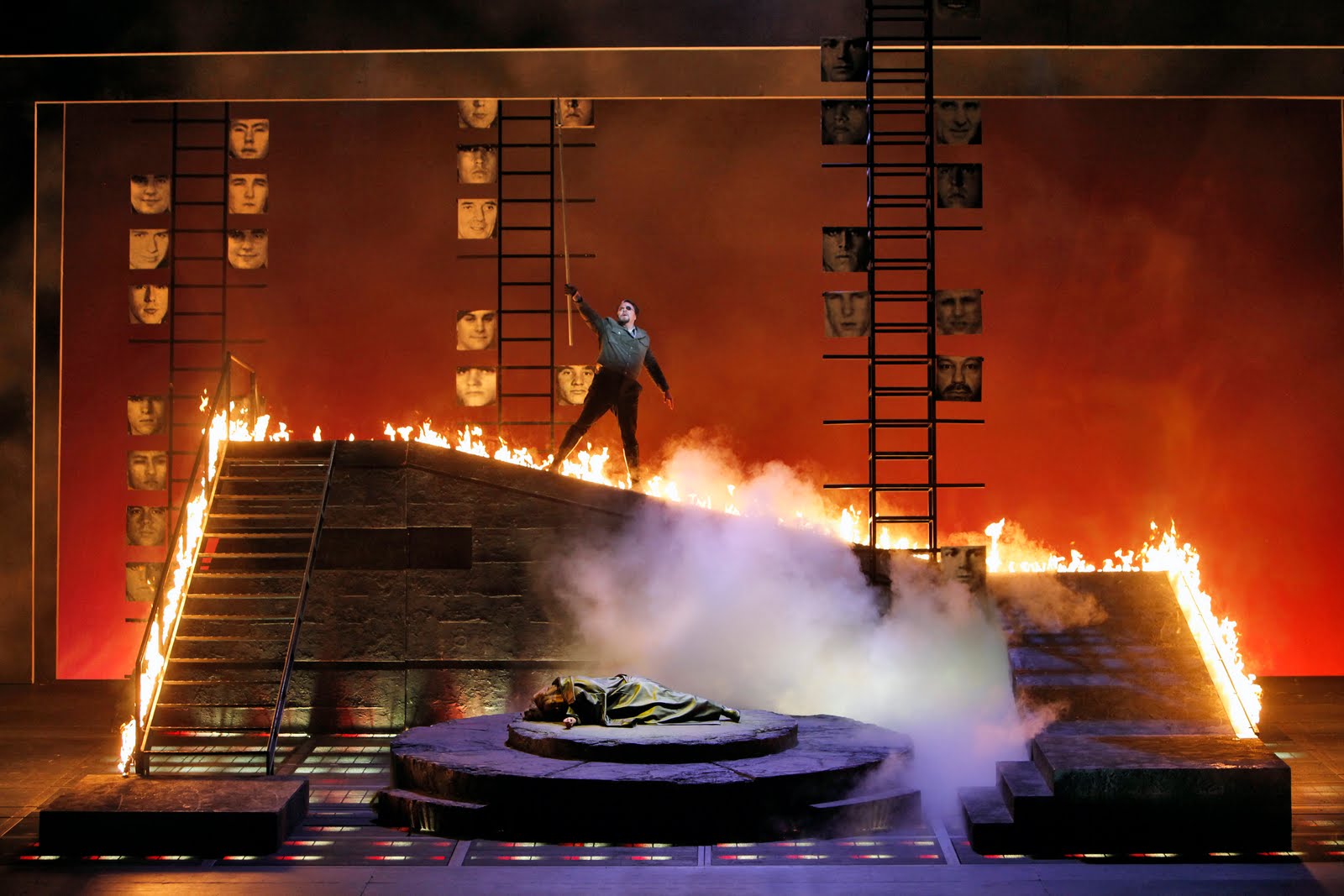 Kreuzer’s third topic, the “Gong”, left me a bit flustered.  I had always classified the gong as a percussion instrument, like the cymbal or the glockenspiel, and not as a theatrical device.  Kreuzer explains that it was used in mid-19th century as a sound effect, like a thunder sheet, and considered disreputable and cheap.  Wagner uses it twice in Rienzi and once in Hollander but them seems to go into a state of artistic contrition, banning it from his scores as a silly mesmeric prop to induce a vague sense of exotic mysticism.  He reintroduces it in the Ring, but clearly as a sound effect rather than a musical instrument — not in Donner’s storm nor in the Niebelung’s smithy scene, but in Alberich’s domination of the Neibelungen and in Erda’s foretelling of the dusk of the gods.

This is a delightful book and reinforces the central argument that Wagner’s creative contributions were made as much to the stage as to the sounds that come from it.