The next step in Oper Leipzig’s chronological presentation of Wagner’s work, his 1845 Tannhäuser, was profoundly undermined and rendered ineffective by the failure of the stage director, Calixto Bieito, to engage the work.  So obstinate and pervasive were the efforts to prevent depiction of the necessary action of the drama, that it was impossible to follow the narrative, understand the characters’ relationships with each other, or experience any substantial aspect of the spine of the drama.

To be clear, it was not that the action was re-interpreted, or that it was set to take place in a different historical period or geographical place.  It was not even that the story was discarded in favor of a different story that also fit the words of the play.  It was not that people who are sexy were shown as plain, or people who are villains were shown as virtuous, or that events that were described by the author of the script were abandoned.  There was simply no story, no action and no progress of the characters in any coherent narrative sense.  People behaved, but that’s about it.

The Venusberg music in Act I was well performed by the Leipzig Gewandhausorchester under the baton of Ulf Schirmer, but no action took place except for Venus’ lolling around the stage calmly stroking branches of trees.

The Landgrave, Wolfram and colleagues celebrated Tannhäuser’s return to court by smearing him and each other in stage blood.

In Act II Elizabeth greeted the hall, after which she approached her friend Wolfram, who told her “Go to her,” gesturing to Tannhäuser, with whom she then embarked upon a graphic sexual encounter, provoking Wolfram to bang her high-heeled shoes against the set in frustration.  As the act progressed, Elizabeth was the object of explicit sexual pawing by Tannhäuser, her father Landgrave, and some members of the noble chorus whose faces had been disfigured.  Some of this she liked, some of it she didn’t, but it seemed difficult to follow the chorus’ attestations that her virtue was being offended by Tannhäuser’s song.  These nobles re-appeared at the end of the show, their fancy dress soiled and with zombie-like mannerisms, to hail the redemption granted by Elizabeth.  This too was hard to swallow; she sang her third act aria while shooting up dope in an effort to appease her seemingly paralyzing drug addiction.  Wolfram tried to kill her by strangulation twice before her aria and once after it, all unsuccessfully.  (Wolfram successfully did in Elizabeth in a singularly misconceived production in Bayreuth some years ago, you may recall.  That was death by bio-degradation, or something.) 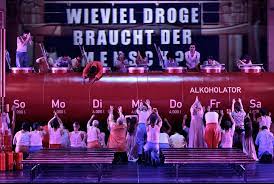 I list these peculiarities not to mock the production but to illustrate why an evening spent this way is impossible to assess or to share with others.  One is unmoved because one is not told or shown anything moving.  I am not a stickler for adherence to mid-19th century stage directions, and I am not reporting that the production’s staging differed from the author’s description.  Instead, I’m reporting that what the characters said to each other had nothing to do with what they did.  So it was all, artistically, a lie.  This happened in a recent Bayreuth Meistersinger, when Sachs pounded on a typewriter and referred to it as a shoe.  That is fake theatre.

It did set me to thinking about the drama, though.  It’s very difficult for many of us to be profoundly moved by Tannhäuser’s need for “redemption,” and indeed whether his dalliance with Venus is a thing he needs to be redeemed because of.  Nevertheless, over the years I have been profoundly moved by the intermittent delicacy, intimacy, nuance and urgency of Tannhäuser’s spiritual journey itself.  Perhaps we can start all over again, at the beginning, by acknowledging the basics: this is the narrative of a passionate soul, an artist/anarchist, torn by almost-addictive attraction to each of two impossible polarities.  It may be, as it traditionally has been assumed, that it is between libertinism and chastity.  It may be between anarchy and social oppression.  It may be between being loved and being condemned.  For the purpose of this drama, it may be between any polarity one chooses, but the story being portrayed, surely, is a seeker’s hoping to find way forward between them, yes?.  What psychologists call “integration” — an acceptance, a willingness to let go, an attainment of mature adult interaction with others about you.  The skill of being happy.  The appeal of Tannhäuser is that he desperately seeks it, discovers that for some reason he is incapable of attaining it, and ends up no longer trying.

There’s a lot one could do with this narrative, and Wagner did an awful lot of it.  What a shame the Leipzig audience was denied the opportunity to be inspired by it in the course of charting our own difficult personal journeys.