Stage director Patrick Bialdyga, making his debut at Oper Leipzig, has given us a spare and incisive interpretation of Lohengrin that reveals the very essence and soul of the work.

In Bialdyga’s production notes, appearing in the consistently excellent Leipzig programs, the director points out two perceptions of Lohengrin as starting points.  First, though seemingly “grand” in its use of settings and chorus, the action of the opera actually involves only the five central characters.  Distinct from Dutchman before it and Meistersinger after it, the chorus in Lohengrin is remarkably passive, almost decorative.  It never participates in, much less precipitates, the dramatic action; rather it embellishes it.  It assembles when convened and sings in reflection of the events that it (along with the audience) observes.  So the chorus, while musically riveting, may be acknowledged as a dramatic non-participant.

Second, each of the five main characters is palpably needy, and what they need is something that another character onstage either has or can control.  So the story of the play is the series of tactical moves that each character makes, in order to achieve a strategic end that is necessary to their being made whole, and that can be accomplished only through interaction with – and, often, defeat of — the others.

This sounds like an overwrought description of a very common style of dramaturgy, but applied to Lohengrin it is unorthodox and refreshing.  At the heart of Bialdyga’s production is the kind of inter-familial dependency, needless cruelty and psychological complexity that one finds a few decades later in Hedda Gabler and Cherry Orchard.  And Bialdyga’s production achieves this interpersonal focus by visually trimming away the pomp of scenery and chorus – simplifying the former and placing the latter behind translucent screening, apart from the action – and bringing the characters, and only the characters, to the forestage.

Elsa needs her innocence validated, and her corrupt and vindictive mentor substituted for a truer love.  Lohengrin needs to be of service as an emissary of Montsalvat, to protect Elsa and Brabant, but also to love and be loved; and for reasons both ethical and practical, he must hide his “magical” origins if he is to invoke their powers.  Ortrud needs to regain the office and respect that her family lost upon the death of her father, and to remain true to the gods of her tradition.  Telramund needs to address the consequences of Elsa’s rejection and the loss of the expectation he had mistakenly invested in her, and to reconcile himself to his partnership with an unloving and scheming wife, the “second-best.”  And Heinrich needs to find someone to lead the armies of Brabant, a necessary component to unify Germany at the end of his nine-year truce with Hungary during which he has re-armed and re-fortified the country in anticipation of its invasion.

The more you ponder these circumstances, the more the interdependence of the characters becomes both obvious and its tragic outcome unavoidable. Most exciting for the drama, it becomes clear that it is not that one person has what the other needs, but rather that each has the power – and the incentive – to frustrate the others.

Watching this all play out in the context of the ordinarily ponderous and “grand” Lohengrin is a sheer delight.  The actors could not possibly have been more clear or sung better.  Simone Schneider’s Elsa was sublime, transparent in her needs and decisive in her promise never to challenge her hero’s bona fides.  And when Lohengrin, in response, sang “Ich liebe dich” (the only time, as David Vernon points out, that these words are spoken in any of Wagner’s mature works), her entire life snapped together.  Hans Florian Vogt sang the title role beautifully (as he always does) and his demand not to be questioned came across, not as an arbitrary loyalty test, but a necessity for his love and protection, so earnestly sought, to persist. 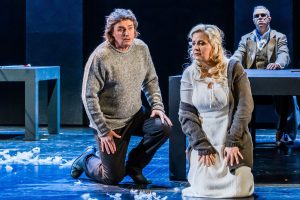 Simon Neal played Telramund as a man defeated from the start, desperate to regain his honor and both figuratively and literally blind to the futility of his condition. 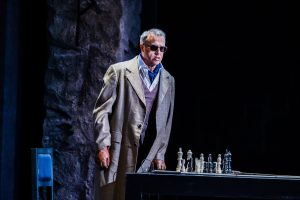 Stephanie Müther’s Ortrud was worse than evil – she was obsessed by her need for fidelity to the old gods and her re-assumption of her father’s lands, power and status.  Nothing posing an obstacle to these ends could she recognize as legitimate.  Everything in her way had to be destroyed.

Evil is an adopted choice to do harm; by contrast, obsession feels rational to the person obsessed, a necessary consequence of a meaningful and sensible decision, and its consequences are all the more frightening.  Günther Groissböck sang Heinrich beautifully and rendered a definitive portrait of a supposedly all-powerful monarch who was, in fact, at the mercy of events controlled by others.

The music of Lohengrin is the stuff you can lose yourself in, and the Oper Leipzing chorus, under the direction of Thomas Eitler-de Lint, was divine, particularly when given the chance to shine as at the end of Act II.  Conductor Christoph Gedschold was supremely sensitive in instances where Vogt wanted to near-whisper – such as the start of “In fernem land” – and forceful without bombast when called for.

In all, a revealing and moving production of which any opera house would be proud.