Oper Leipzig’s 2021 production of Die Meistersinger was staged by David Pountney, the famed British director of traditional and contemporary work (including the Ring in Chicago and the world premiere of Philip Glass’ The Voyage at the Met) whose career spans 40 years.  It was a joyous evening, richly performed by a capable and insightful cast and played with virtuosic skill by the Leipzig Gewandhausorchester under Ulf Schirmer.  It made you grateful not only to be in the room, but to be alive.

The setting was impressive but a bit distracting, inasmuch as it seemed to pose a challenge to the actors that hovered between obstructive and dangerous.  The main structure was an amphitheater-like saucer, familiar to students of Wieland Wagner’s Neu-Bayreuth productions.

The immediate effect was to be reminded of a community where, as the Greeks in festival time and Nürnberg here, everything stopped and thousands gathered to experience (and competitively award) art.  In the center of the amphitheater was a sculpture of miniature buildings evoking old Nürnberg.  Pountney firmly assured that the very spine of the narrative was always front-and-center: There is a community, admittedly an imaginary one, where art is what matters; where people err, and sometimes err in mobs, but will always return to their shared love of their artistic culture; where one’s birth, fortune, sword and family influence don’t matter in being recognized and honored by the community.

Mathias Hausman has made a strong impact on audiences as the Herald in Lohengrin and Kurwenal in Tristan.  Here, his Beckmesser was entirely successful – capped in black, angular, angry, deluded. 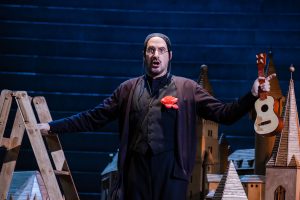 The scheduled David, Mathias Stier, was indisposed and a member of the company, Dan Karlström, assumed the role on a few hours’ notice.  He was terrific and the audience was pleased to share its delight at his success.  Two of the leading ladies in the company – Elisabet Strid and Kathrin Göring – assumed the roles of Eva and Magdalene, respectively, and were just fine.  James Rutherford’s Sachs was the focus of the moral progress of the play and lent that subtle mix of gravity, wisdom, sadness and twinkle that the role of Sachs uniquely possesses.

It has been proposed that a contemporary audience’s ability to experience Meistersinger has been profoundly compromised by the past century of German history.  Nürnberg as a happy historical community of burghers and bakers, it is suggested, can no longer be entertained, or even imagined, as Wagner had intended.  Now, the name itself is indelibly linked – intuitively, in our very imaginations – with Nazi rallies, fearful documentary films, and the first effort of civilization to hold accountable at law entire countries that engage in global warfare and the intentional extermination of millions of people.  And old Nürnberg — delightful, gabled, narrow-street, half-timbered Nürnberg – was destroyed forever when, on January 2, 1945, a million incendiary devices were dropped on the city, leaving 100,000 people homeless and rendering it a pile of rubble. 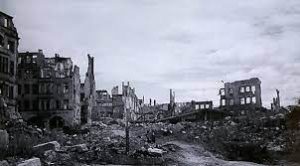 Barry Kosky’s recent production in Bayreuth insists that Nürnberg can no longer be depicted on the stage with moral neutrality.  My Leipzig experience challenges this conclusion.

In the course of this festival, I have become increasingly aware of Wagner’s use of myth as a tool for an audience’s self-recognition and inspiration.  Wagner used shared stories – historical in the case of Lohengrin, vaguely cultural in the case of Tannhäuser, epical in the case of the Ring – to incite the cultural memory of the volk for whom the work was intended.  Myth was intended to lend the work, in performance, some sense of primal recognition.  The narrative onstage is meant to be perceived, at least at some subliminal level, about “us.”  Setting this play in medieval Nürnberg suits this purpose.  This town never actually existed.  There never was a group of tradesmen who governed a municipality by song.  Wagner was not depicting Germany as it ever was.  Nor did Aeschylus ever suggest that the House of Atrius ever really existed. Instead, these dramatists set their stories in mythological places in order to provoke a combination of wonder and recognition.  Nürnberg itself – Nürnberg as we know it in fact — has nothing to do with it.

It was a very happy evening, and helped to dispel the one I had experienced a few days before in Berlin.

Siegfried Mauser is a German pianist and teacher who headed various highly regarded schools of music in Wittenberg, Munich, Salzburg and elsewhere.  Between 2016 and 2018, Mauser was charged with, and ultimately convicted of, various crimes including sexual harassment (involving a female harpsichordist colleague, not a student) and sexual assault.  Mauser’s prosecutions prompted broad controversy on a number of issues, including (on the one hand) whether the careers of German musicians are being improperly controlled by an older generation of conservatory faculty exercising unwarranted, uncreative and at times abusive power, and (on the other hand) whether established and esteemed careers of accomplished men such as Mauser were being sacrificed to the whims of the Me-Too zeitgeist.

These events apparently informed the Deutsche Oper’s new production of Die Meistersinger, which opened on June 12, 2022, and which I saw on June 29.  Casting a look-alike for Mauser as Sachs (Johan Reuter), the three credited stage directors (Jossi Wieler, Anna Viebrock and Sergio Morabito) place the action in a music conservatory run by Prof. Veit Pogner (a touching Albert Pesendorfer) and featuring Sachs as an instructor of percussion. 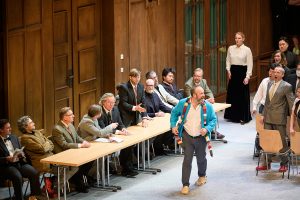 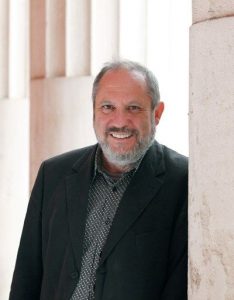 The remaining meisters constitute the rest of the faculty, and ten cis-hetero apprentices are very active indeed – not only setting up chairs and such, but also objecting to the boss’s offering his daughter as a chattel award for best singer, and engaging in various forms of oral sex during Sachs’ monologue at the beginning of Act II. 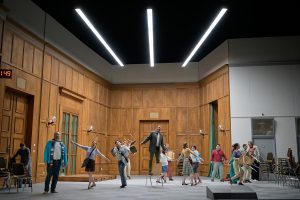 Sachs not only does not make shoes; he tends not to wear them, and what part of his time is not spent grappling sexually with the boss’s daughter is spent practicing yoga. 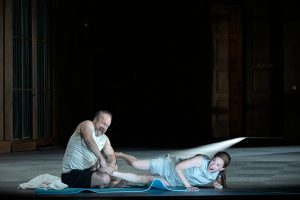 Indeed, he instructs his student David (a very good Ya-Chung Huang) not in the drums but in singing while maintaining the Vrikshasana, or tree pose.  Walther (beautifully sung as usual by Klaus Florian Vogt) enters this closed community with only one objective – to get the girl; and Eva (American Heidi Stober) enthusiastically reciprocates. Indeed, when the curtain first rises, we see the two of them vigorously sucking face while the professors follow the score of a recorded chorale. Their decision not to elope at the end of Act II is precipitated not by a hesitation of conscience, or even of self-interest, but by Sachs’ viciously conking Walther over the head with a whiskey bottle and leaving him unconscious.  Upon regaining his health, Walther waits until the end of the song contest and then abruptly leaves, with Eva blowing kisses to a heartbroken Pogner.  There being no one left onstage to persuade or enlist in the cause of German art, Sachs and the group sing to each other about how wonderful they all are. 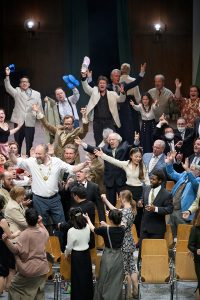 This was all very dispiriting and smacked of an intention purposefully to undermine the work.  There’s malice afoot here.  Many things in the script don’t work in this production, and are merely ignored.  But the tell-tale sign lies at the heart of the work: Sachs’ observation to Walther in Act III about the meisters:

Please give up your resentment now!
You are dealing with men of honor;
they make mistakes and are content
to be taken on their own terms.
People who offer prizes
expect also that the people who want them

should please them to get them.
Your song made them uneasy;
and rightly so; for when you think of it,
it is with such fire of poetry and love
that daughters are seduced to adventure.

These are wise, pointed and observant words, particularly when directed to a haughty, self-assured young man who talks better than he listens, and whose sole goal is to seduce the daughter of the man offering the prize.  Exempting Beckmesser, no one in this town acts in bad faith, but rather by their best leadings – what Quakers may call “their portion of the Light.”  They are concerned to protect their legacy; there’s nothing g wrong with that.  Recognizing the legitimate concerns of those who appear to oppose you is a skill of maturity.  But maturity is not what we see onstage in Berlin.

If there were any doubt as to the producers’ intent to undermine, rather than illumine, this script, consider that, in the final scene, the entire citizenry of Nürnberg attend the Johannestag festival wearing Crocs – the only footwear that a cobbler, by definition, cannot possibly make.  As Barak Obama would say, C’mon…. 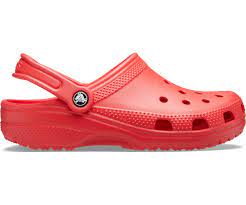 By PeterP 2 months ago
Add Comment
The Wagner Blog