The July 14, 2022 performance of Parsifal marked not only the end of the mammoth Oper Leipzig Wagner 22 Festival, during which every stage work written by Wagner was performed in chronological order of composition; it also marked the end of Ulf Shirmer’s tenure as General Music Director of Oper Leipzig.   The sense of occasion was palpable, and tears and flowers were the order of the day at the final curtain.  The performance, and the entire festival, were of a very high order. The cast was nearly impeccable. René Pape’s Gurnemanz remains definitive. Falk Struckmann was a very strong Klingsor, as was Mathias Hausmann as Amfortas (particularly moving in Act III). By my records, this was the 22d time I’ve attended a performance of Parsifal, and I cannot remember a better Kundry than Elena Pankratova. She also sang the role in the recent production at Bayreuth, where I also heard her Ortrud; this, though, was a level quite beyond. The orchestra was once again beautiful.

The production dates from 2006. Roland Aeschlimann directed and designed the sets. It is a visually arresting staging, using bold colors and spare décor; consequently the focus is on the immediate relationships that drive the action. 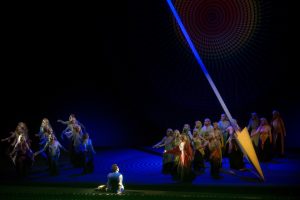 Aeschlimann offers an interesting interpretation to Act III. When Parsifal offers to baptize Kundry, she declines. In the Grail Hall, Amfortas appears to die from his grief and his guilt; nevertheless Parsifal lays the spear over him and leaves it there. He summons the Grail, which in Act I appeared to be a shining triangle of violet light; but now it is shown to be a hanging dodecahedron, spinning as it slowly turns, emitting fabulous and ever-changing colors in its various facets. Parsifal disappears from view through the crowd of Knights, Amfortas revives, and Kundry comforts him and nestles with him. The two are relieved of the excruciating pain that they had caused each other, and become a loving and comfortable couple. As the Knights retreat, their community reunited by the return of the Grail, Parsifal observes, apart from the action.  The curtain falls as Kundry and Amfortas begin their lives anew.

I found this apt and provocative, and entirely in keeping with the core lesson of the work. Parsifal is about healing wounds – both those experienced by individuals and those wrought upon the community. It is about rectifying the ways a person, and a group, have gone awry, and re-discovering a right order of living – both individually and with each other. The community’s dissolution described by Gurnemanz in Act III – no longer meeting together, foraging for food, no longer united in spirit – is the consequence of Amfortas’ incurable wound, which was inflicted by Kundry in the course of the curse under which she labors.  The curse is a consequence of her sin in lacking compassion for another person.  Her curse is controlled by Klingsor, whose ambition to be perfect was twisted into self-inflicted wounds in pursuit of chastity, when gnarled into a raw need for power and revenge.  Amfortas’ physical wound is intensified by his moral self-disgust, leaving Titurel with no heir and the community with no hope. Titurel’s death exacerbates Amfortas’ self-hatred even further, in response to which he seeks the oblivion of death. The community is on the edge of extinction because each dominant agent is self-absorbed, and incapable of forgiving themselves.

This production suggests that Parsifal does not seek to recover the spear and return to Monsalvat in order to be a new king; rather, he returns in an exercise of mitleid, in order to heal. The community is once again rightly-ordered through the agencies of compassion, forgiveness, reconciliation, faith and love. Parsifal is the intervenor, not the leader. The community is redeemed and re-directed by taking responsibility for each other, in a state of acceptance and faith. 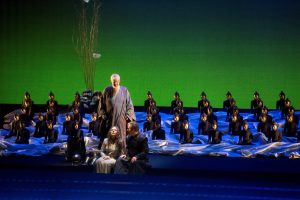