There is a great deal of excitement in Der fliegende Holländer.  The overture is one source.  If you ever doubted Franz Lachner’s remark that “the wind blows out at you wherever you open the score,” the truth will be confirmed in the first minute of Christian Thielemann’s vivid conducting.  Fresh sound soars out of the invisible pit, urgent and wild.

And there is the magic of the story: a ship bearing the Living Dead reaching shore before our eyes, a chest of priceless treasure, the manic obsession of Senta, and a double suicide — one by leaping from a precipice and the other by the drowning of a ship in an ocean whirlpool.

Stage director Jan Philipp Gloger has latched onto one of those pieces of magic — the chest of treasure — and refocused the entire work on it.  He correctly reminds us that the driving force of the play is not Senta’s yearning for the Dutchman, but Daland’s searching for wealth.  That is the desire that forces the action forward.

Good enough.  But does that action have to be so mundane?

Daland operates an electric fan manufacturing concern, and the Steuermann is his accountant and general factotum.  The ladies don’t spin — they crate the fans for shipment.  And they simper.  The dual suicide prompts not so much a redemptive sacrifice, as an opportunity for a new product line for the factory. 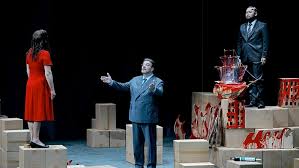 This all well and good except for two concerns.  First, Mr. Gloger may have directed two operas (!!) and many plays, but I sense he has never even entered a factory.  To spend all evening with his idea of businesspeople — idiots, blowhards, mincing women and men, mindless automatons, toadies — is disheartening.  Too many stage artists depict working people (whether bosses or employees) as iconic dolts.  Too often, for instance, Gunther and Gutrune are played as idle rich with nothing to do but prepare for dinner.  Really?  Can’t we go a step or two beyond the cliché?  It needn’t be realistic, but must every capitalist or worker be a walking cartoon?

My other concern is that, in this production, the action of the play — the triumph of money and business over love, joy and redemption — is boring.  The production is didactic, monolithic, and (the worst theatrical sin) predictable.  The characters are two-dimensional in service to the konzept, and a lot of chilling and exciting stuff went away or was marginalized.  I don’t think I’ve seen a more boring staging for the first entrance of the Dutchman, or a more dull confrontation of the zombie crew with the townsfolk.  And Erik as the janitor of the factory?  Cheap shot, easy mark.  (Why is he caulking the iron I-beam, by the way?  And what’s with the stage revolve going all through the duet?)

So the story of the play is that money makes the world go around.  Oh.  News to me, never entered my mind, how about yours?