On my last visit to Bayreuth, the Christoph Marthaler Tristan was the new production.  This past visit, it was now at the end of its run and subject to a not-so-fond farewell.  As theatre it was still miserable.  As a chance to hear Tristan, it was a sensation.

Oceans and torrents and waves of sensuality poured out of the invisible pit under Peter Schneider’s disciplined baton.  This score defies understanding and sweeps one up in tumultuous, uncontrolled anxiety.  The Bayreuth orchestra played it as well as one could possibly wish.

Iréne Theorin was a masterful Isolde, though hampered (as was Robert Dean Smith) by quirky dramatic directions.  Smith never seems to have abandon inform his musicianship, while Theorin certainly does.

Pity Kwangchul Youn, whose beautifully sung Act II lament competed with such odd stage business as Isolde’s pointing at flickering lights, characters approaching and staring at walls, and Kurwenal taking a slow circumnavigation of the entire set.  This is the production where the dull Act I set is hoisted above the nasty Act II set and then both are piggybacked on top of the drab Act III set, and fluorescent lights flick off and on.  Ugly is one thing; incoherent is another thing; yucky incoherence is… yecchhh!

And it’s not just the look of the thing — it’s the characterizations themselves that are so wearing.  In Act I Isolde wears a wig out of the musical Annie — all curls and spunk, a demon enraged. 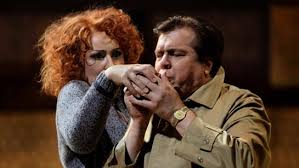 In Act II she sports a nasty bright yellow dress with a bow in the middle, white gloves, and 1960s lacquered red hair, behaving something between infantilized and lobotomized. 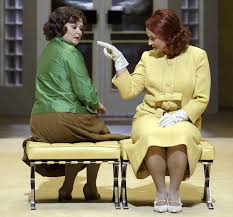 In Act III her hair is sensibly cropped and she tucks herself into a hospital bed, covering herself with a sheet, at the end of the show.   It’s all nonsense to me.

You can see the end of Act I in this production here and the senseless staging of the entry of Melot and Marke in Act III here.  Really, it is so hard for your eyes to be so at war with your heart….  If that’s what Marthaler was aiming for, he got a bull’s-eye!