A special issue of The Wagner Journal comprises, in its entirety, Emma Warner’s new translation of Wagner’s essay “The Artwork of the Future.”  It is eye-opening, even riveting, and as important a piece of writing on topics Wagnerian as I have read since Magee’s Tristan Chord.

My own past efforts at reading Wagner’s prose have been frustrated by the impenetrable translations offered by William Ashton Ellis.  One is encouraged to believe that Wagner’s original writing style is equally turgid, but — as the excerpt below shows — this new translation proves the lie.

I have also relied upon the 1964 compendium, Wagner on Music and Drama, edited by Goldman and Sprinchorn, and despite its current clouded reputation I owe that volume a great deal of thanks for being there at all at a time when my appreciation of Wagner’s theories was in early development.  But Warner puts them all to the chase.  One only wishes that all of the major essays were given such splendid treatment for English language readers.

Of the many compelling arguments in the essay, Wagner’s seriatim history of the “three human art forms” – dance, music and poetry – is quite magnificent and especially convincing.  He understands each of these arts to be divine in origin and serving the purpose of tribal affirmation.  The development of each art from its primitive glories, however, was a history of decline, away from the sacred and into the realms of religion and ornamentation.  At the time of this writing (1849) Wagner despairs that sacred gestures are now used a pretty artifice, and that the all-consuming absorption that was once given to communally received artwork had devolved into its use as mere background for social occasions.  Theatre – to Wagner the ultimate communal worship – is now simply an occasion for parties and talk.

I was struck anew at Wagner’s passionate convictions about the existence of the divine, and the urgent need to worship and pay deference to the spirit that surrounds us.  His distinction between the genuinely spiritual and the decadently religious is of course a precursor of the discourse of the 1960s and 1970s in which I framed my own spiritual and social convictions, and during which I first heard and read Wagner’s works.

The penultimate section, translated as “Basic Features of the Artwork of the Future,” concentrates on the necessity for a new physical place in which to witness art – that is, a new theatre.  It is remarkable how detailed Wagner’s concepts were, more than 20 years before Bayreuth.  And in his own words the “mystical abyss” and other familiar clichés become entirely practical and compelled by the utility of the exercise itself:

The requirements of art are twofold:  those of the giver and those of the receiver, who mutually interact, permeating and determining each other.  The stage’s first task is to provide the appropriate space for communal dramatic performance: then it must solve the question of communication with the audience by relaying this dramatic action to the eye and ear in a comprehensible fashion.  The design of the auditorium is determined by the need to see and hear the artwork, and this, along with the functionality of the space, must constitute the beauty of the design; for the public has joined together for the artwork alone, so to grasp it the eye must be drawn to it by everything it meets.  By watching and listening the audience is transplanted onto the stage: the performer is an artist only if he merges with the public.  All that breathes and moves on the stage is driven by a need to communicate, to be seen and heard in that space which, to however relative a degree, yet from the point of view of the set seems to the performer to contain the whole of humanity: and the audience, that representative of public life, vanishes from the auditorium, it lives and breathes in the artwork, which now seems to be life itself, and on the stage, which now seems to be the whole world. 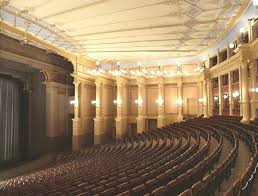 A 21st century reader examines these observations of 175 years ago with frank astonishment.  Can we even imagine the nature of the tittering social events that Wagner’s contemporaries contemplated as “theatre”?  Is it not shockingly prescient that in 1849 a non-architect would postulate that the beauty of a building’s design arises out of its functionality?  And why do we “modern” audiences accept the legitimacy of theatre that is not a coherent narrative communication of a story that we recognize as our own? 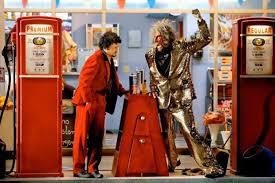