Retired British family physician Paul Dawson-Bowling has written a splendid second and enlarged edition of his 2013 volume, Wagner: The Complete Experience and Its Meaning to Us.  I intend taking it with me to the Wagner 22 festival at the Leipzig Opera later this month.  Before extolling its virtues, I owe Dr. Dawson-Bowling a sincere apology. 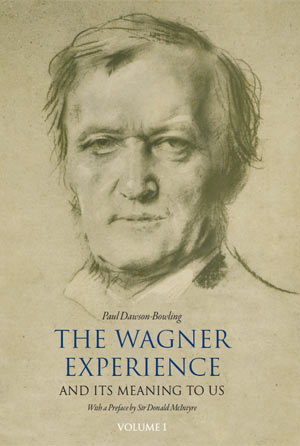 Readers of this blog may be aware that I am a collector of Wagner books, and a small(ish) segment of these I call “Follies.”  These are volumes, often by British authors, often published between 1890 and 1925, that have attractively designed covers, peculiar and garish illustrations, and practically no other redeeming value.  I collect them because they amuse me.  These include A Day With Wagner (“It is before six o’clock on a July morning in 1873 when Ricard Wager rises from his bed to work”)… 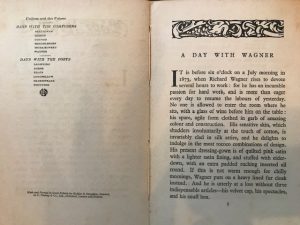 … The Operas of Wagner, with illustrations by Byum Shaw (“Just then a secret door opens and in comes Telramund with a quartet of disaffected nobles”); The Story of the Rhinegold by Anna Alice Chapin; The Ring of the Nibelung by Gertrude Henderson (“She opened her eyes, in which the glory of the Valkyrs still flamed, and implored Wotan”); The Wagner Story Book (“The maid tells the princess that she might better not put out the torch at all, for a treacherous friend of the knight has watched them”)… 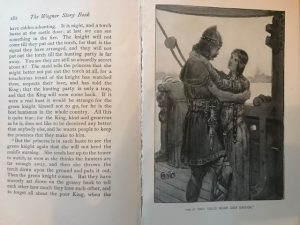 … and one of my very favorites, The Ethics of Wagner’s The Ring of the Nibelung, by Mary E. Lewis, which includes a handy appendix of Ethical Significance of Persons and Things (“The Anvil: Symbol of slavery and Servitude.  The Gold: Truth.  The Ring: Truth perverted and bent to the ends of self.  Also, the perfected round of mere human knowledge.”) 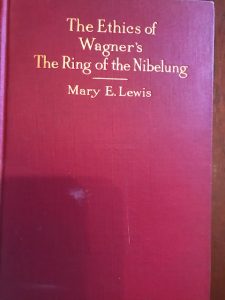 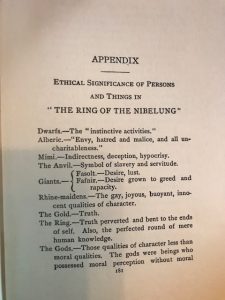 When it was first published, I thought that Dr. Dawson-Bowling’s book was a “Folly.”  Why, I don’t know.  The title?  I confess this to my shame, because it is a very warm, informed and provocative companion for a Wagnerian about to spend a month in Leipzig in either a hotel room or a theatre.  (Bayreuth on steroids.  My Gude Wyfe is, sensibly, staying home and minding the garden)

Volumes II and II of this work address each of the dramas from Die Feen to Parsifal, offering musical and dramatic guides somewhat in the manner of Ernest Newman but with far less exhaustive biographical and compositional detail.  The chapters are written as knowledgeable companions to the works and, in the case of Die Feen, Das Liebesverbot and Rienzi, this was I plunked down the pounds sterling to acquire the book before leaving for Leipzig.  And handy they are, too.

Volume I might fall into the “Folly” category were it not so very well written, so well thought out, so well observed, and so unexpectedly and constantly enlightening.  Dr. Dawson-Bowling is just the kind of fellow I would love to attend Bayreuth with, and have dinner with after each performance.  He is not scholarly or definitive; he is not Millington or Spencer or Skelton or Newman.  He’s just a well-read, deep thinking, widely imaginative guy who really knows his Wagner and a lot else besides.  He’ll just throw stuff out there: for example, that Wagner “helps to resolve human disunities as does almost no other art.”  Or that “for Jung as for Wagner, the Will to Power is surely as mighty a demon as Eros, and just as old and original.”  He mentions Bryan Magee and then William O. Cord; now Neville Cardus (Wagner attracts young admirers because he addresses “such old-fashioned matters as idealism matched against corruption, in revolt of youth against custom, in love as a solvent”) and now Henri Fantin-Latour (“I have never seen anything more fairy like [as the Rhinemaidens scene], so wonderful, so well produced”).  Here is the Orestia; there is Marx; and now we have Jacques Lacan.

But it is the good doctor’s sensitivities, not his erudition, that most profoundly distinguish his book.  Example: Early on, he addresses the idea of redemption.  And he reverts for three pages to a description, not of Wagner, but of Peter’s denial in Bach’s St Matthew Passion.  Dawson-Bowling is arguing for the power, in great art, of recognition:  “There is something universal about the experience of being weighed in the balance and found wanting, of Peter recognizing that Christ had seen through him and knew him exactly as he was.  Peter sees himself as contemptible in his own eyes as well as in Christ’s; and there is absolutely nothing he can do about it.”  And Bach then follows on with the thing art alone can provide: Beauty.  “Erbarme dich, mein Gott.”  Our author then makes his point: “Wagner achieves the same, again a kind of secular salvation created through mind-altering art.”  At the end of Walküre, writes Dawson-Bowling, Wotan cannot deny that “it is his fault and his mistakes that have created the catastrophe.  Wotan sees himself as having totally failed, and (again) there is absolutely nothing that he can do about it.  This too is a situation where many people could testify to parallel experiences of their own.  As happens with Bach, Wagner’s music and drama also pour down a shower of beauty… [T]he effect is to draw people into the experience, so that they participate in it, live in it, and live through it, and this time it is Wagner’s genius, musical, dramatic, psychological, that irradiates it and reorders the psyche in ways that make real the experience of being whole again.”

This is fine stuff.  Doctor, please accept my apologies along with my admiration.  If you come along to Leipzig I’ll make up for it by buying you a beer.

By Richard Wagner 1 month ago
Add Comment
The Wagner Blog