On a dreary, cloudy, drizzly, chilly afternoon in Leipzig, the Wagner 22 Festival got off to a happy start with a performance of Wagner’s earliest work, Die Feen.

I had never heard a note of this piece until this fine performance and I found it entrancing.  I had been told that this was 20-year old Wagner’s attempt to model Weber’s Die Freischütz, but I kept hearing Beethoven in this young composer’s impulsive harmonies and muscular melodies.  Here we have here a most impressive work – a very young artist composing for the stage with assurance, confidence and success.

I rely on the excellent essays provided in the Oper Leipzig program.  The story is based on Carlo Gozzi’s The Serpent Bride.  What it was that attracted the adolescent Wagner to this story I cannot fathom.  It depicts two worlds – the earthly realm of Tramond and the Fairy Kingdom in which the beautiful Princess Ada dwells.  Arindal, son of Tramond’s king, comes upon Ada, in the form of a doe, and is translated by love to the fairy kingdom where he dwells for eight years as Ada’s husband, fathering two children.  By virtue of his breaking his vow never to ask where she comes from (sound familiar?), Arindal is banished and seeks to be reunited with his fairy family.

All this happens before the curtain goes up.  As promising as Wagner’s musical powers are, his dramaturgy was pretty poor.

Nevertheless, while through-composed techniques don’t yet appear, we have several instances of extended cabalettas that perform the same function – they depart from the established structure whereby narrative is advanced through recitative and the narrative is paused while emotions are expressed by arias, and instead they allow action (and, more importantly, character development) to occur in the course of the music.  This is a precursor to Wagner’s signal contribution to the development of musical theatre – the use of the score to advance the story rather than to embellish it.

The Leipzig production was described by a colleague as a “curate’s egg,” and I suppose it was. 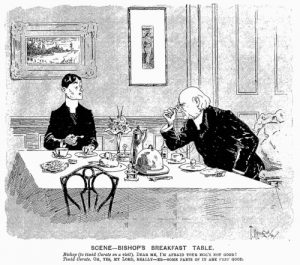 The stage direction by Renaud Doucet was sometimes old-fashioned and sometimes delightful.  His decision to “bookend” the already recondite story by having it take place in the imagination of a depressive Leipzig husband with a distant wife, after a dinner party with their grown children – and with the husband assuming the role of Arindal – added little and distracted a lot.  The costumes by Andre Barbé were disconcerting.  The fairies were depicted as vaguely rustic 1820’s bonneted women, featuring in their first scene a mostly nude, blindfolded and silent hunk sitting on a lounge chair in the corner. 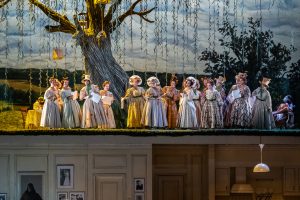 The armies of Tramond were decked in clunky, fungible helmets and frocks, all the more ironic in light of Wagner’s “most vigorous” objection, when the opera was first planned for performance in Magdeburg, to “the knightly garb from the distant Middle Ages” that the producer intended.

Barbé’s sets were also hit-and-miss. It was a shame that the action periodically returned to the drab Leipzig apartment house, and the reliance on wing-drop settings was sometimes brilliantly successful (as the third act ordeal scene) and sometimes provincial (as the second act painted chandeliers).

One is always grateful to the performers of such an enjoyable evening.  Neither the conductor, Matthias Formney, nor the actor portraying Arindal, Marc Horus, was originally announced, and Mr. Horus showed some signs of fatigue as the performance went on.  (It is not a brief piece; as Dr. Johnson said of Paradise Lost, “None ever wished it longer.”)  Viktorija Kaminskaite as Arindal’s sister Lora and Kirsten Sharpin as Ada were very good indeed and gave a lusty account of their well-written roles.

I have no idea why Die Feen is not regularly produced at Bayreuth.  It is a solid work, entertaining in its own right, and seems to me extraordinarily important for students of Wagner’s artistic development.  The program notes that the production is “In Kooperation mit den Bayreuther Festspielen, BF Medien GmbH.”  I don’t know what this portends but I say it’s all to the good.