Wagner approached Shakespeare’s Measure for Measure intending, at the outset, to “take the seriousness out of it.”  This is like adapting Hamlet but skipping the part about the Dad’s murder.  The result is fundamentally flawed unless you forget the Shakespeare entirely and take Das Liebesverbot on its own terms.  Once that adjustment is made, it becomes interesting and, as evidence of Wagner’s dramatic and musical development, intriguing.

Wagner’s story centers on a novice nun, Isabella, who is summoned from her convent to intercede on behalf of her brother, Claudio, who has been sentenced to death for engaging in sex with his girlfriend.  This “ban on love” has been unilaterally imposed on Palermo by Friedrich, who has been recently installed governor in the temporary absence of the king, and who has also forbidden the celebration of the upcoming Carnival.  The citizens of Palermo object and Isabella discovers that Fredrich himself is subject to the powers of sex, agreeing to pardon Claudio only if she submits to him.  Clownish machinations by oafish police combine with the clever duplicity of Claudio’s degenerate friends to expose Friedrich’s hypocrisy, and all turns out happily – and licentiously – in the end.

This is Wagner’s Italian score, taking after Bellini and espousing (in his 1837 essay of that title) “song, song, and again, you Germans, song!”  Our young theatre artist, now at the ripe age of 24, is instructing German opera audiences what they ought to like, and giving them bel canto with a Saxon accent.

The result is more intriguing than entertaining, by far.  The use of the chorus in establishing the central conflict and advancing the action is quite powerful, from the very first scene, displaying a skill for nuance that is a precursor to the last act of Hollander.  And if you’re looking for Italianate vocalism, it’s there in the early duet between Isabella and her fellow nun Mariana, as well as in Claudio’s aria.  But the comedy misses, despite the very best efforts of Leipzig’s talented actors. After Die Feen one is no longer freshly impressed by the assurance of the writing, and one senses the errors of youthful ambition: a misunderstanding of the source material; an artist speaking in a voice other than his own; and a kind of desperation to please, borrowing another’s cloak to do so.

Yet at the very spine of this work are themes that we recognize as fundamental to the developing artist:  a condemnation of hypocrisy, a skepticism of law and social order, and an urgent insistence upon carnal love as a disruptive and purgative moral force.  In her dealings with her brother, Isabella is shown to be just as didactic and uncompassionate as Friedrich.  Both are unsympathetic to the need of the citizens to express lawless licentiousness through the Carnival – depicted in Leipzig with much cross-dressing and references to animal behavior. 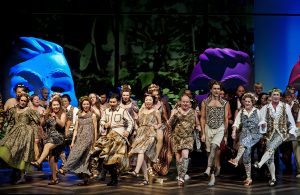 At heart, Das Liebesverbot is the story neither of Isabella nor Friedrich, but rather of Palermo’s taking action to ensure free expression of its own carnality.  A scant 20 years later, the author would draft the “poem” for Junge Sigfried, whose finale featured two lovers consummating raw lust while proclaiming the end to law, a disdain for socially imposed morality, and an embrace of laughter and death.

Indeed, the main action of the Ring may be summarized as the decline of god-inspired law and order in favor of human-inspired anarchy.  The action of Liebesverbot foretells it. 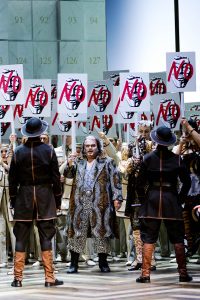 Once again, Leipzig has mounted an entirely professional, well-rehearsed production, conducted again by Matthias Foremny with a briskness that Rossini would have admired and that occasionally left the string section running to catch the bus.  Tuomas Pursio as Friedrich and Manuela Uhl as Isabella were commanding, though he was either encouraged or permitted to engage in some unconvincing buffoonery.  That style of acting was best achieved by Stefan Sevenich, whose Dogsbody-like Brighella proved an audience favorite.  Nina-Maria Fischer was entirely beautiful as Mariana and Magdalena Hinterdobler rang the bell as who tart-with-a-heart Dorella. 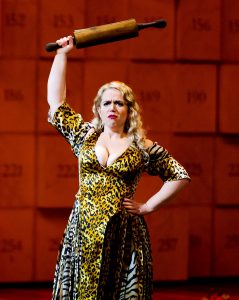 In presenting the score of Das Liebesverbot to Ludwig II, Wagner called it “the folly of my youth.”  If only all of our youthful follies were so professionally achieved!