Edward Bulwer-Lytton’s most broadly recognized contribution to English literature is the first sentence of his 1830 novel Paul Clifford: “It was a dark and stormy night.”  This one sentence, in turn, inspired the Bulwer-Lytton Fiction Contest which, for 40 years, has attracted competitive entries for, and awarded international recognition to, the worst opening sentence of a (mercifully) imaginary novel.  The 2021 prize went to Stu Duval of Auckland, New Zealand, for this treasure: “A lecherous sunrise flaunted itself over a flatulent sea, ripping the obsidian bodice of night asunder with its rapacious fingers of gold, thus exposing her dusky bosom to the dawn’s ogling stare.”

Bulwer-Lytton’s 1835 novel, Rienzi, the Last of the Roman Tribunes, starts off: “It was on a summer evening that two youths might be seen walking beside the banks of the Tiber, not far from that part of its winding course which sweep by the base of Mount Aventine.”  Richard Wagner read the book in 1837, at the age of 24, and was utterly entranced.  He completed his opera based on the novel in 1840, and it was premiered in Dresden in October 1842 – the young composer’s first smash hit, making him famous at the age of 29.

The most mature of Wagner’s three “juvenilia,” Rienzi stands today as a fine example of popularly admired music theatre of its time.  Rienzi gave the audience what it wanted: It is broad in scope, excessive in its sentiment, and solid in its musical execution.  Wagner was not a shy man and his vision of contemporary grand opera was excessive.  Where other scores called for on-stage instruments (including Don Giovanni and many of Wagner’s own mature works), Rienzi’s stage band features 12 trumpets, organ, deep church bells, four ophicleides, and four drums.  The four-hour score features marches you can march to, hymns you can hum, a trousers role to die for, and even a burning building you can watch collapse, simultaneously roasting all three of the central characters.

(Even in the Ring, Wagner restricted himself to only one character’s self-immolation to bring down the curtain.)

The Leipzig production, dating from 2007, is entirely sensible, impressive, and tasteful (which it must be said the work itself only fitfully accomplishes).  An announcement was made before the curtain that, owing to Covid, 21 (!) members of the chorus were unable to perform, but not to worry.  Worry not, indeed – that left the company with only umpty-ump zillion choristers to do the show, and the audience shouted its appreciation for them at the end. 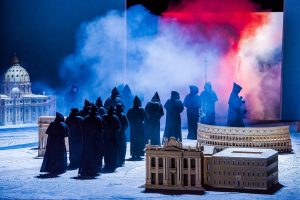 The director was the late Nicolas Joel, and the sets were by Andreas Reinhardt; their contributions set the tone for a solid success.  New York audiences may remember Joel’s production of Andrea Chénier at the Met; he succeeded Gerard Mortier at the Paris Opera.

The performance also featured the first spine-rippling performance of the Festival, by Kathrin Göring as Adriano, the lover of Rienzi’s sister Irene and the conflicted son of his enemy.  Ms. Göring has been a member of the Leipzig company since 2001/02 and has assumed many of the leading roles in the repertory, to no one’s surprise who has watched her act.  Wagner’s admiration for Wilhemine Schröder-Devrient finds an exemplar here, in the very role that Schröder-Devrient herself assumed at the premiere – she is physically committed, exciting to watch, fully impassioned, and musically capable, and cuts a fine figure in men’s evening wear.  This brand of acting one does not see every day in the opera house.

Wagner’s treatment of the fickle populace of Rome bears an interesting parallel to Shakespeare’s.  In Julius Caesar, the citizens at first are moved to agree with Brutus that Caesar’s assassination was legitimate: “As Caesar loved me, I weep for him; as he was fortunate, I rejoice at it; as he was valiant, I honor him; but, as he was ambitious, I slew him.” Then, before our eyes not ten minutes later, they do a 180-degree turn and are persuaded by Marc Anthony that the assassins lawlessly struck at the heart of their own interests, committing politically-inspired murder and deserving punishment and death.  The mob streams through Rome, killing as they go:

Cinna the Poet: Truly, my name is Cinna.

First Citizen: Tear him to pieces; he is a conspirator.

Cinna the Poet: I am not Cinna the conspirator.

Fourth Citizen: It is no matter.  His name’s Cinna.

Third Citizen: Tear him, tear him! What, brands ho!

Similarly, in Rienzi, the people at first express powerlessness over the rule of the unaccountable Nobili; then respond to Rienzi’s call to overthrow their oppressors; then raise Rienzi to political heights in response to his brave leadership; then regret the cost of the battle against their enemies; then blame Rienzi for their losses; then stone and burn him and his family in the Capitol.  One is set to thinking whether Rousseau and Jefferson did us any favors by postulating that governments derive their just authority from the consent of the governed, when the governed are so prone to madness. 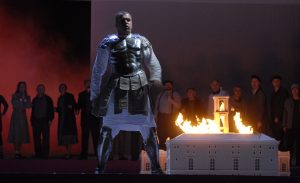 It is eye-opening (or ear-opening?) to chart the development of the composer within even this one piece.  The first two acts are serviceable, sporadically revealing sophisticated and imaginative orchestration.  The last three acts leap ahead in harmonic confidence, demonstrating more than just assurance, but rather creativity and spark.  Again, one wonders why the work is not regularly available to Wagner enthusiasts in Bayreuth.

By PeterP 2 months ago
Add Comment
The Wagner Blog