Considered as a precursor to Tristan, Meistersinger and Parsifal, Der fliegende Höllander is easy to marginalize or even dismiss.  Considered as the next work after Rienzi, however – as we are invited to do at the Leipzig Wagner 22 festival – it is nothing less than astonishing.

Gone is much of the evident structure of opera – recitative leading to aria, pleasing musical ensembles, finales that operate as symphonic codas to wrap up the acts with a flourish.  These structures are there, in fact, but enmeshed in a tight and compelling theatrical narrative so urgent and so exciting that one is often unaware of them and is simply pushed along by the ghostly story.  How could this astonishingly original score have come from the mind that just completed the grand opera Rienzi?

As so often happens in art, it is impossible to know.  Wagner himself (albeit an unreliable autobiographer) confessed that he was at first unaware, while writing Tristan, of the epoch-making creativity that his work attested to. By his own telling, he wrote Höllander because he was moved by the feeling of danger in the boat trip from Riga, attracted to the myth of the ever-wandering fugitive soul seeking home and redemption, and boom, out it all came.

What happens with the first urgent zing of the strings at the downbeat of the Vorspiel, and the insistent sounding of the frightening hollow fifths, is something difficult to describe but easy to recognize.  It is the definitive statement of fear, coming from one who, as a boy, experienced nightmares in bed and hours of trepidation amongst the rigging of backstage provincial theatres.  Wagner and Mozart both wrote of their physical excitement in merely listening to an opera orchestra tune up – Wagner expressly mentioned the sound of fifths in the strings and the apprehension and eagerness the sound provoked in him.  He (and generations since) responded with wonder to the opening of Beethoven’s Ninth Symphony, with its amorphous cloud of pianissimo strings yielding sharp, unexpected and confusing hollow fifths.  Having enjoyed Feen, Liebesverbot and Rienzi, we are now plunged into a different world entirely.

We who respond to Wagner know this world and, indeed, yearn for it.  But what is it that Wagner is doing to us, exactly?  What is this remarkable aesthetic that Wagner seems uniquely able to provoke in us?  Paul Dawson-Bowling suggests that the “Wagner Experience” arises from two skills that Wagner uniquely possessed: The depiction of human psychological complexity in both music and stage narrative, and the ability to harness the power of myth in a way that contains and expresses its unique power of communal recognition and affirmation.  This may or may not be so, but it is good enough to go on, and certainly illustrated in Höllander.  Senta’s psychological disturbance is so extreme and so theatrically profound that some stage directors have used it as the spine of the action – the narrative being not the Dutchman’s redemption, but rather Senta’s progress from mania to suicide.  The Dutchman’s needs are transparent, but they are not merely described by Wagner – they are portrayed and indeed constitute the essential power of the entire story, taken on its face.  Both characters are twisted, challenged, set upon to assist each other in the course of seeking their own mental balance and spiritual salvation.  Nothing in Wagner’s prior work, or one might argue even in contemporary works such as Lucia, contains insights into the tortured psyche that we don’t merely observe, but recognize.

And the role of myth takes us from the realm of the extreme case study (such as Lucia) to the condition of communally shared art.  Somehow, at some level, we all know this story.  We all have recognized it since Odysseus – the lost soul seeking relief from pain though discovery of another person whose love and acceptance will grant them rest.  So it is plausible (and indeed helpful) to identify in Wagner’s embrace of individual human psychology and broadly recognized western myth a unique “tone” that we recognize as Wagner, sui generis.

I would add to that, however, the particularity of Wagner’s musico-dramatic skill.  Not everyone can tell that story in an uninterrupted 2.5 hours on the stage in a way that frightens, alarms, appalls, and eventually satisfies an audience.  And in 1841 certainly no one was prepared to set that story to a score that did not apprehend audience applause to interrupt the action; that flowed from scene to scene; that used men’s and women’s choruses to prompt dramatic action, advance the plot and heighten the dramatic excitement; and that deftly resolved melodic and harmonic challenges that it, itself, presented.  We are past the point of competence now – we are in the realm of creativity that the author himself may not have been in a position to rein.

Leipzig’s production dates from 2019, and was directed by Michiel Dijkema, who also designed the sets.  Dijkema brilliantly perceives the similarity between stage rigging and the rigging of sails, and from the first stark tableau conflates the hanging flattage, lighting rigs, and stage wagons with the world of ships and the sea.  The play takes place not in Norway, but on the stage, and what an exciting stage it is!  When the Dutchman’s crew finally awoke in response to the taunts of the villagers, a vast red-sailed ship appeared and swirled across the orchestra pit and over the first ten rows of the audience.  Leipzig was mounting a ghost story, and went the whole hog.

The musical direction by Ulf Schirmer was flawless and the responsiveness of the orchestra so telling that the entire band came onstage for a curtain call, to ecstatic whoops from the crowd.  A uniformly excellent cast featured Elisabeth Strid as Senta and Thomas J. Meyer as the Dutchman, and their Act II duet was perfect.  They cared for and listened closely to each other, matching not only tone and volume but dramatic need and tenderness.  It was as good a performance of these two characters as I have ever seen.  (I add that Ms. Strid played Sieglinde in the tragically aborted Chicago Lyric Opera Ring.) 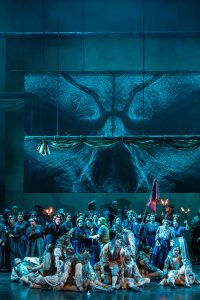