Having completed the score of Lohengrin in April 1848, Wagner did one of the things he was best at – getting in his own way through hubris.  In May 1849, he engaged in various revolutionary activities, and by no means benign ones.  Not only does Wagner lose his post in Dresden but, having assisted in violence resulting in the deaths of several of its citizens, has to flee to avoid arrest. 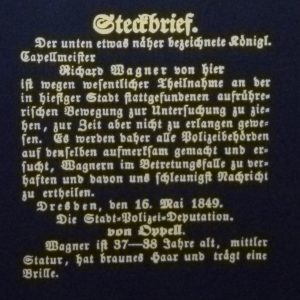 Settling in exile in Zurich, he immediately gets to work and, between June 1849 and January 1851, writes his three seminal essays – “Artwork of the Future,” “Art and Revolution,” and “Music and Drama.” He also finds time to author “Jewishness in Music,” have an affair with Jesse Laussot, sketch out Siegfried’s Tod and Junge Siegfried, and in July 1851 writes “A Communication to my Friends.”  The most productive period of his life continues, drafting most of the Ring poem in 1852, and composing Rheingold, Walkure and most of Siegfried in 1853-55.

Then comes Tristan.  A bump in the road.

Various reasons are proposed for Wagner’s interrupting his work on the Ring to write Tristan, among them his need for cash by generating a small-cast easily-produced love story, disillusion that the Ring could ever be produced, and a persistent series of “ear-worms” that kept distracting him.  None of these can justify or explain the work itself.  Tristan seems to have erupted from Wagner’s body like an illness; he himself seems not to have intended, or even at first been aware of, the epochal nature of this score.  It is not the beginning of 20t Century writing; it is not atonal.  Instead, it is persistently tonal yet astonishingly innovative harmonically, exhausting the possibilities of modulation.  To give you a sense of it, and put a smile on your face, click here for “Happy Birthday,” Tristan-style.  Tristan is the apotheosis of the Romantic Period.  After Tristan, there was not much left for Mahler, Bruckner and Strauss to do.

Sketches were completed in 1856, compositional work begun in October 1857, and the score was completed in August 1859.

In Leipzig, we are skipping over the musical work during this period – the first two and 2/3 compositions of the Ring.  So we do not experience the shock of Wagner’s first experimentation of compositional technique by motif rather than by formal structure.  Nor do we get to hear for the first time alliterative stabreim or the sensational advances in staging that Rheingold presents to us.  Assume that all of these innovations have been established and are now familiar.

Still, all of this seems like pap compared with the purely musical innovation of Tristan.  Each time I attend a performance I am apprehensive, almost intimidated, by being in the room.  It is like experiencing Bach’s St Matthew Passion, a towering human accomplishment – but, for me, far more exhausting and challenging in strangely personal and esoteric ways.  Leaving the theatre, I sometimes feel I need to take a shower.

The performance in Leipzig was convincing and affirming of the great, great beauty of the score.  Ulf Schirmer and the Gewandhausorchester were very good indeed, though the conductor and the Isolde seemed not quite as one during critical moments of the performance — an unavoidable happenstance under these circumstances affording such limited rehearsal of such mammoth works.  British soprano Catherine Foster took a break from her Bayreuth rehearsals to render an Isolde of international caliber; not surprisingly, Rene Pape’s King Marke was of exceptional quality.  Andreas Schager is a strong and reliable Tristan but lacks the nuance, the vulnerability, and the touching sense of defeat that the role demands.  As Brangane, Barbara Kozelj was a triumph.  She is superb in the role.

The stage director, Enrico Lübbe, is from the “legitimate” theatre, with experience running the Leipzig Schauspiel and other theatres and few operas before taking on Tristan for Leipzig in 2019.  It is the nature of a stage director that, when asked to stage any theatre work, he will go ahead and stage it.  Perhaps with Tristan an exception should be made.  It is not Schrager’s fault that the end of Act I lacked any sense of intimacy or mutuality, when he was 35 feet away from Isolde and competing with a revolving set, the entrance of chorus, lighting shifts and a scrim on which films were being projected.  And when, in Act III, Tristan hallucinates seeing Isolde, not much is gained by having four Isolde stand-ins walking around him.

It’s often been observed that not much happens in Tristan, but perhaps it’s time for stage directors to acknowledge that and allow not much to take place.  The music and the way the characters speak to each other is very rich indeed, more than the audience can take in as it is.  Perhaps the most prudent course is the one Jean-Pierre Ponnelle took in Bayreuth in 1981 – give the lovers a sumptuous tree to huddle under, help the actors to make decisions about the text, and then let it go and allow Frau Minne to do her magic.