So many aspects of the Wagner festival in Leipzig were gratifying that it is difficult to report on them all.  The production level of all 13 performances was very high.  The music-making by the Leipzig Gewandhausorchester was consistently brilliant.  The city of Leipzig is very attractive and of heightened interest to music lovers – we had the opportunity to hear the Mass in B minor in one of Bach’s churches, the Thomaskirche, and Sunday worship with chorales and organ in the other, the Nikolaikirche.  Leipzig’s location allowed for trips to Berlin (to see Meistersinger) and Dresden (to attend performances of The Nose and Mahler’s 9th).

Occasional international stars were brought in for specific roles (Vogt, Gould, Vinke, Pape), but it was the very high caliber of the members of the Leipzig company itself that supplied the special fun of seeing the same artist in multiple roles.  Two particular stand-outs were Elizabet Strid, who sang Sieglinde, Eva, Elizabeth and Senta; and Kathrin Göring, who played Adriano, Venus, Magdelena, Fricka and Waltraute.  Ms. Göring is an exceptional actor with a fine voice.  Her impeccable performances in highly contrasting roles delighted us all.  Also noteworthy was Dan Karlström who, in addition to offering a comically sleezy Luzio in Die Liebesverbot and a wily Mime in both Rheingold and Siegfried, played David in Meistersinger on only a few hours’ notice owing to the disposition of the announced artist.

But the lasting gift of this festival was the opportunity to experience – not just read and appreciate – the long developmental arc of this profoundly influential and uniquely exciting theatre artist.  It is one thing to read a biography or study the critical literature; it’s quite another to sit in the same seat with the same people to your left and right and watch what develops night after night.  The “long arc,” as I experienced it, is this:

Raised as a child in a family of actors, the teenaged Wagner wrote a very bad play that, he conceived, needed music to stiffen it up.  Applying himself to music training with the support of his uncle, and inspired by his sisters’ successful performing careers, at age 20 he wrote a symphony, as well as a highly derivative opera, Die Feen, set to his own play.  Young Wagner copied the composers he deeply admired – Beethoven and Weber – and the score is all the more impressive for the age of the composer.  Though Die Feen was not performed during his lifetime, Wagner’s position in a provincial theatre gave him the chance, at age 23, to produce his next score, Das Liebesverbot, again setting his own drama, poorly modelled on Shakespeare’s Measure for Measure, and again highly derivative – this time of Italian opera.  His third play, Rienzi, was modelled on the grand opera style so in vogue in Paris, and was a tremendous success when it was staged in Dresden.  Wagner was 29.

At age 30, Die fliegende Hollander was produced to similar acclaim and young Wagner was appointed director of the Dresden Opera.  In that position, he wrote his next two works: Tannhäuser, at age 32, and Lohengrin, at age 35.  These three announce Wagner’s “voice” as a theatre artist.  He dispatched the recitative/aria tradition, writing dialogue that was melodically sung at a rhythm and pace that nearly matched spoken words, and disguising (though not abandoning) set arias, choruses and ensemble pieces.  Most pointedly, his “sound” was achieved – dark, wood-burnished, exciting and thoroughly orchestral to a degree that other composers were not aspiring to.

Rheingold was the first work to embody all of Wagner’s intellectual aspirations: A story that was epical in origin and therefore culturally resonant; words that had musical qualities; music that had narrative power; one note per syllable, one syllable per note; through-composed.  One senses in Rheingold both audacious creativity and ambition, but also hesitancy – much of the music is based on arpeggios and you can hear the composer finding his way in the new form.  In Walküre, on the other hand, the stream of romantic melody just gushes forth, and one senses a freedom of imagination in the words and a musical lushness in the orchestra, with themes that are looser and far more moving.  Siegfried continues in the same vein, but one hears little artistic development in the first two acts.  They are clever and highly enjoyable as theatre, but they show no advancement upon Walküre in the way Walküre advances on Rheingold, or Rheingold advances on Lohengrin, or Holländer advances on Rienzi.

A break, then, and he turns to non-Ring subjects.  In Tristan he delves into hitherto unknown frontiers of harmonic modulation and discovers the emotional power of protracted unresolved chords.  In Meistersinger he explores the powerful discipline of counterpoint, at one point in the Act I Vorspiel having five themes playing simultaneously. Then back to Siegfried with the Act III Vorspiel.

Now, and to the end of his career, we have Wagner at his fullest.  In this amazing piece we have the horses’ motif from Act III Walküre, the Erda theme, the theme of Wotan’s frustration from Rheingold, the fall of the gods, the spear motif, the Magic Sleep music, and the Wanderer theme – all in the first 45 seconds, tumbling over themselves and creating sounds so rich that the mind can’t follow.  The remainder of Act III and all of Götterdämmerung contain embedded themes, imaginative orchestration, and a dramatic narrative of inevitability that are without parallel in any other work for theatre.

And we close with Parsifal.  In his 1870 essay on Beethoven, Wagner completes his artistic journey by proclaiming that music is the superior art – a complete reversal from the teenager who wanted music to supplement his spoken play.  In Parsifal he writes a score in which words are clearly subservient; every motif except one (“Durch mitleid wissend”) is introduced in the orchestra rather than sung by a character.  Meter is intentionally dissolved; the piece begins with a quarter-note silent rest, and the tonality and time signature is elusive to the point of being impossible to discern until at least a minute into the music.  The music is full of gossamer and at the same time profoundly muscular.  The experience of Parsifal, for many of us, is not only sublime; it is mystical.

Distinct from all the other works, Parsifal speaks not of love nor of power, but rather of resignation, letting go, conciliation.  We’ve followed this man from his teenaged years to his late 60’s, and until now everything he’s done has been full of ambition, drive, insistence.  He built his own theatre, for goodness sake, because the existing world was insufficient to contain him.  And here we leave him, at the end – at the last scene of the last performance of Parsifal in 1882 Bayreuth, nine months before his death, leaving his seat in the darkness and making his way to the pit, and taking the baton from Levi, and conducting those final shimmering pages, not forcing any more, not insisting any more, just having the music flow and flow and flow. 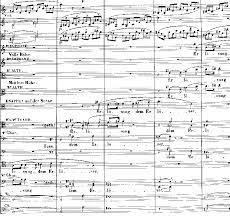